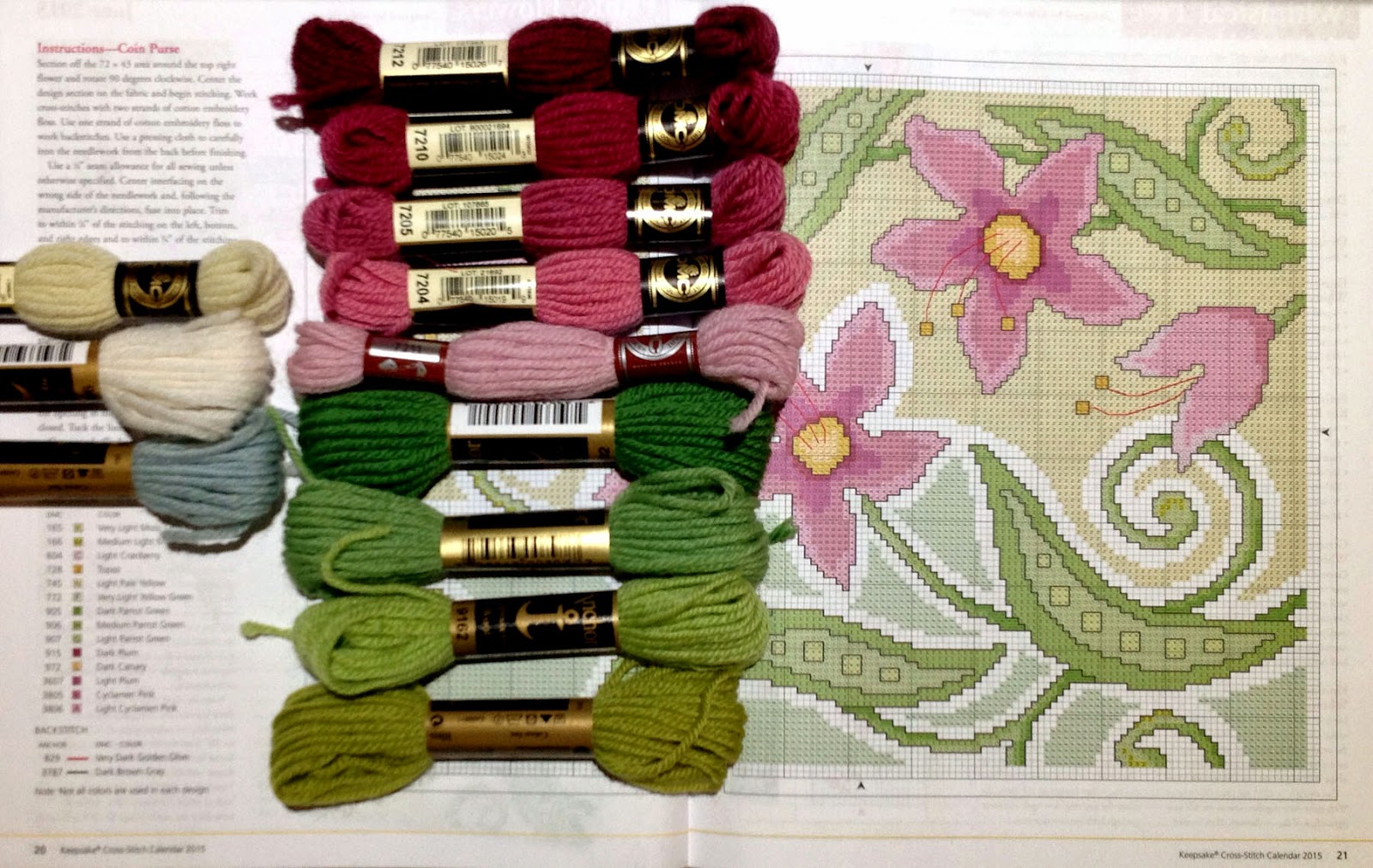 At the end of January I had tweeted about wanting to start the June pattern in the 2015 Cross Stitch & Needlework Calendar.  I had been looking for my next needlepoint project, and was completely taken with this design.  Although intended for cross stitch, but being composed of only full stitches, it would be very easy for me to needlepoint.
I converted the floss colours to tapestry wool and cut a 10 count mono canvas.  I went home that night quite excited to start something new.  Two weeks later I couldn't understand why I had not yet put needle to canvas. 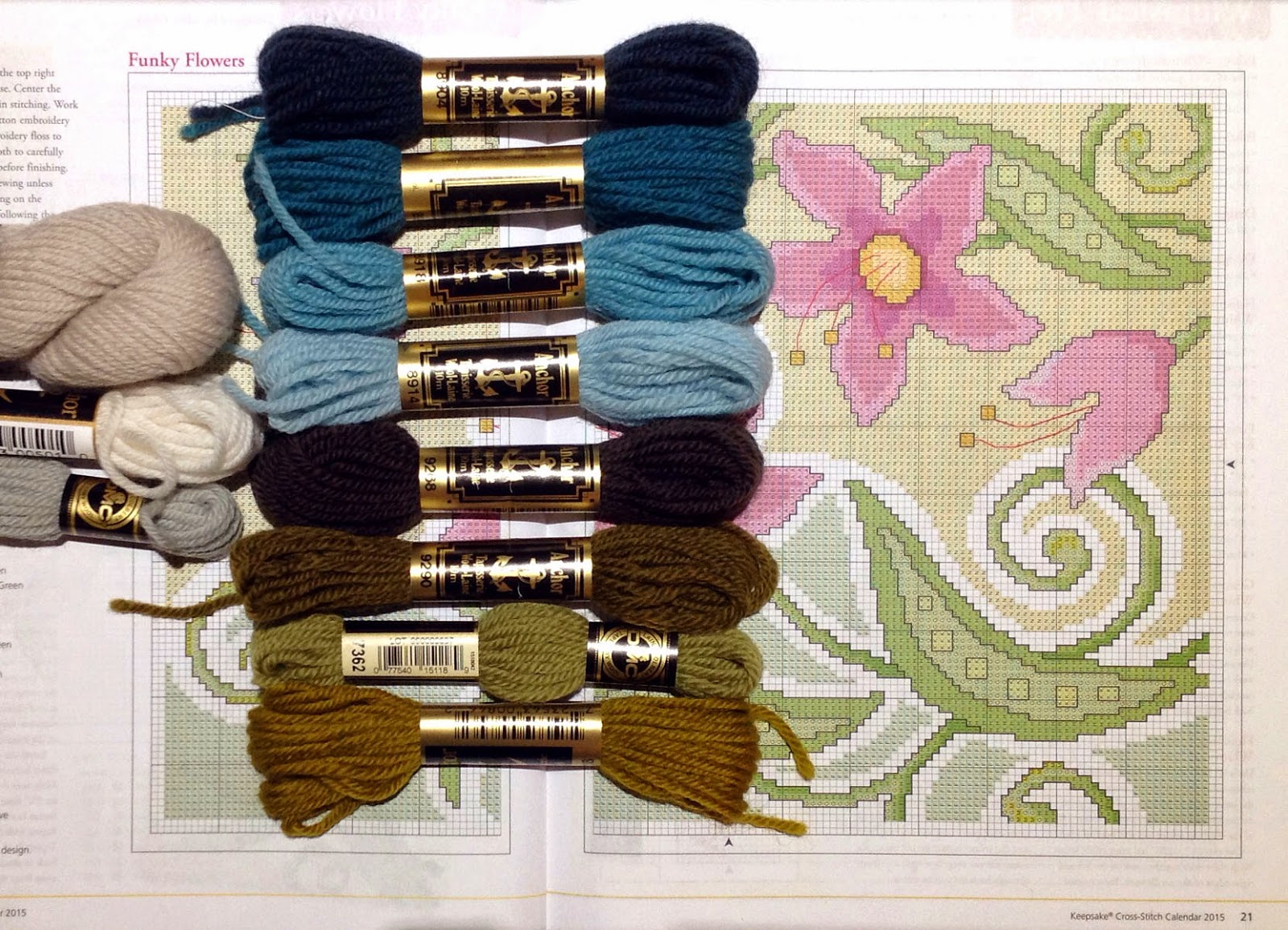 As I discussed this with a friend, she had pointed out that those were not in my usual colour choices.  I think  I had originally chosen the vibrant pinks and greens, to pull me out of the winter blahs and dream of a spring that still seemed far away.  However, having wanted to finish this pattern into a needlepoint pillow, I think in the back of my mind I could also not picture it anywhere in my home.  So I converted the colours to the colours I love - teal and muddy olive (usually referred to by me as pukey) green. 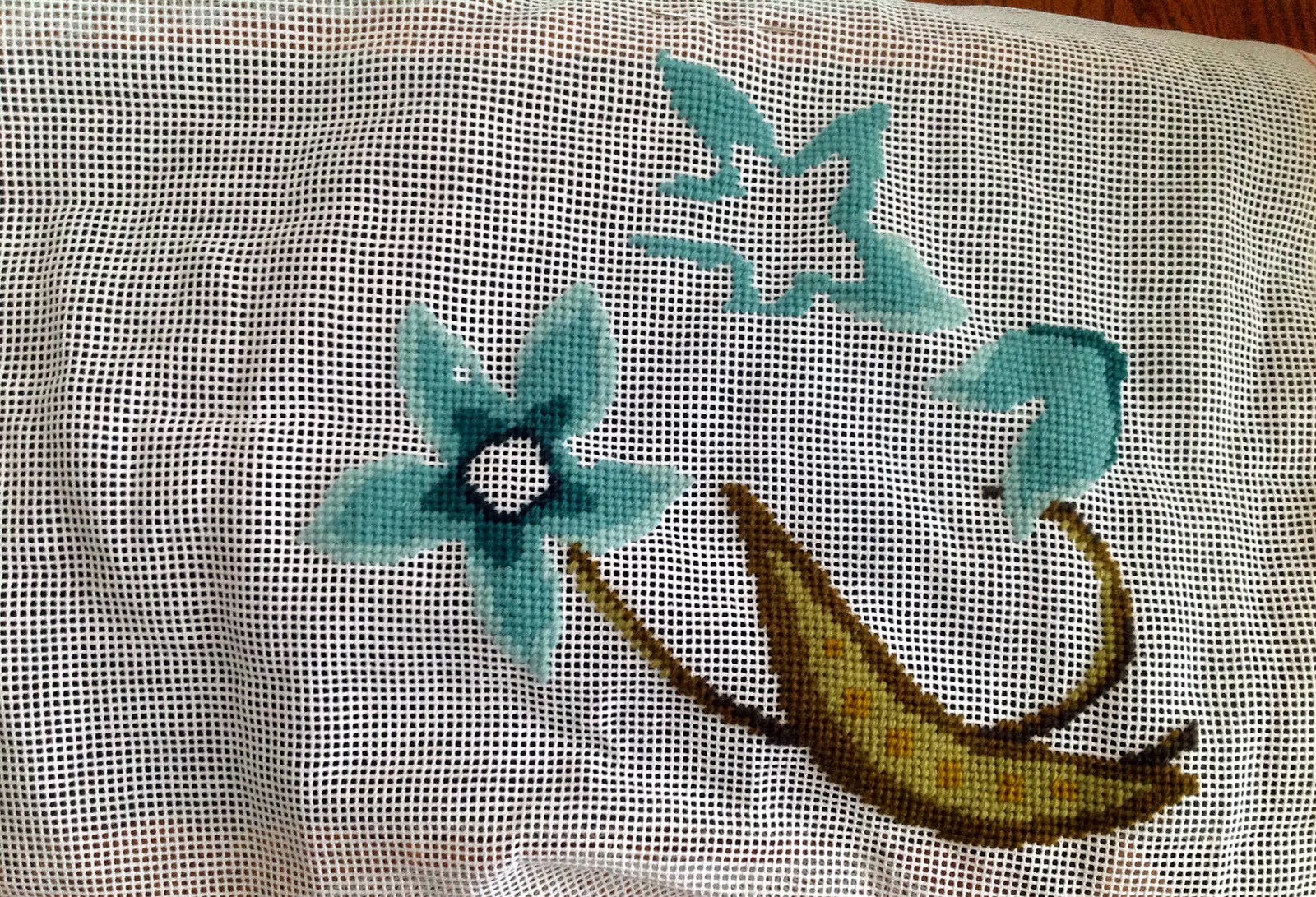 I've been stitching every night since then.  This is how far I got on my first evening.  Viewing my progress in daylight the next morning, I was unsatisfied with the lighter two greens.  I continued with the flowers, but selected new shades of green when I was back in the shop. 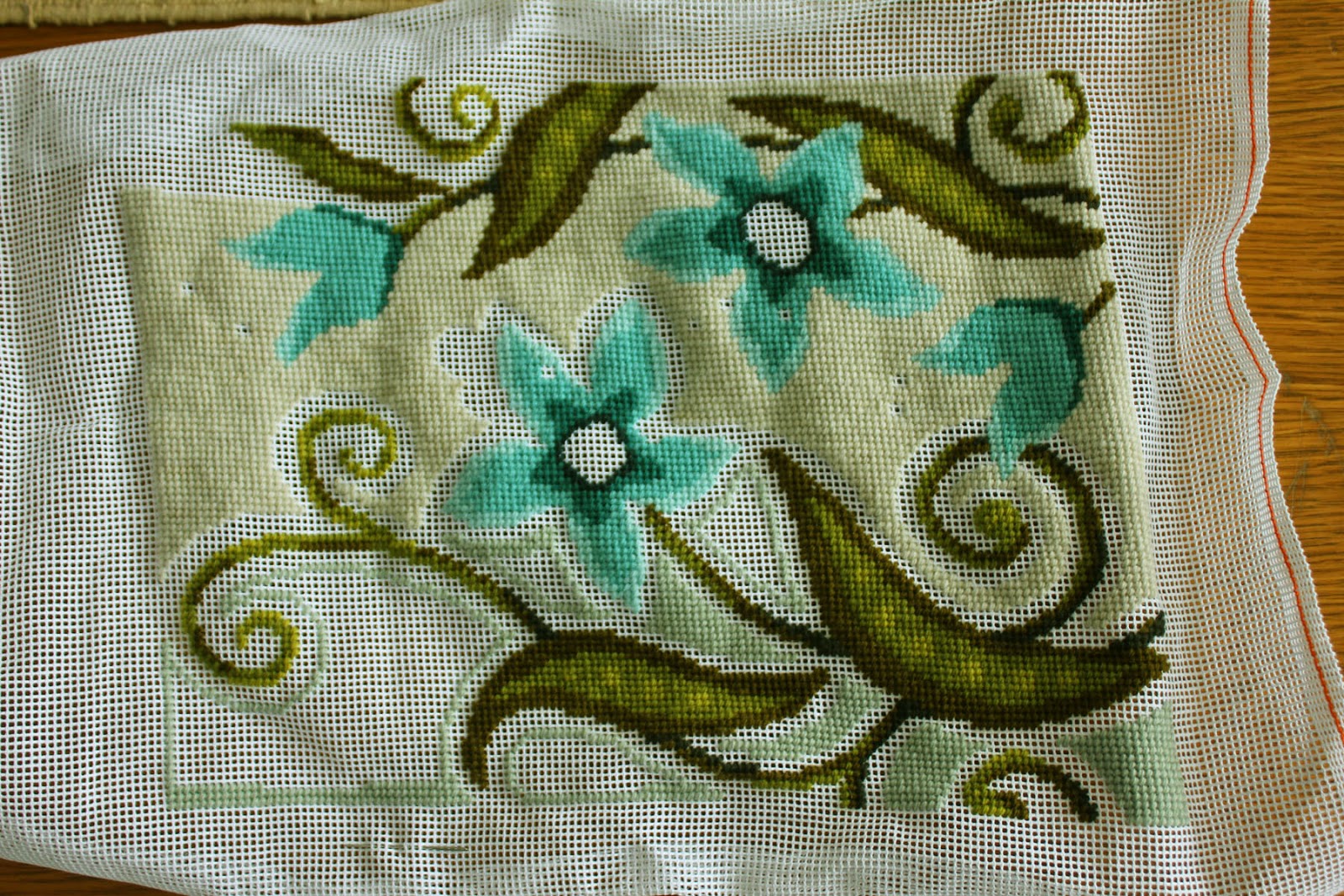 It's now been 3 weeks and here is my progress.  I think that by the end of this week I will be done, with the stitching that is.

Stitching Tip:  The background was not composed of only one colour.  There are defined areas of 3 colours.  Rather than following each symbol and counting row by row, I  stitched the border around each area and then simply filled it in.  This is a great idea for several reasons.
One -  if you miscount, there is less to unpick and less fibre wastage.
Two - you only have to concentrate while stitching around the edge.
Three - when filling in each area, you can pay more attention to the TV, movie, or conversation.

This can be applied to smaller areas as well.  Try it on your next project.  If cross stitching, you can also only stitch the bottom stitch of your cross and later complete the stitches by going over them with the top portion of the cross stitch.  This is only a suggestion if working with solid coloured threads.

Kathrin
I have been a petit pointer all my life, or rather since the age of 11. Today, I engage in all kinds of stitching techniques and design for petit point under the Gitta's Designs label. With my mother I also run a fully stocked stitching shop, Gitta's, located in Port Credit (Mississauga), Ontario, Canada. Gitta's is your one stop stitching shop! Carrying hundreds of designs and supplies for cross stitch, petit point and needlpoint. 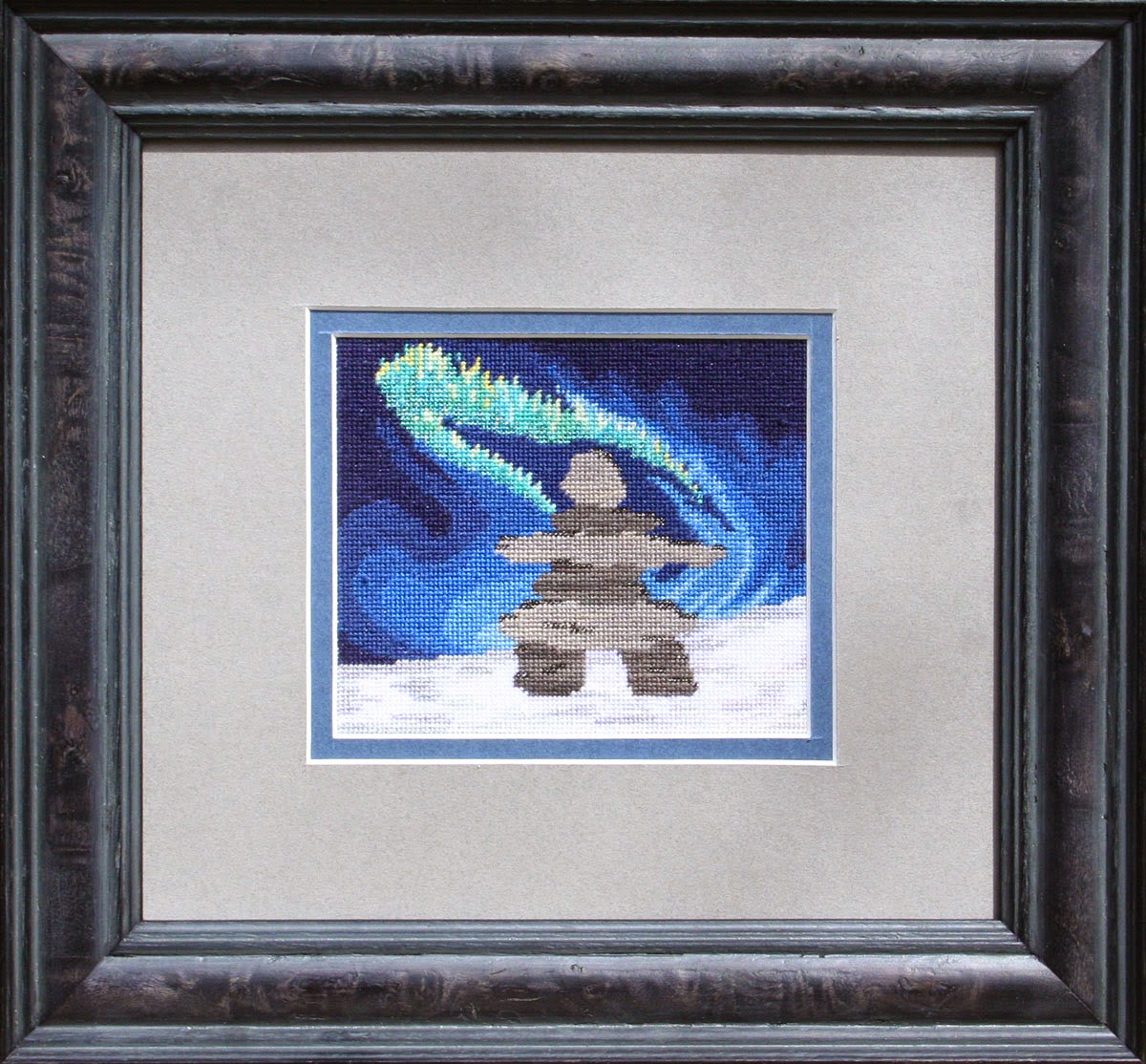 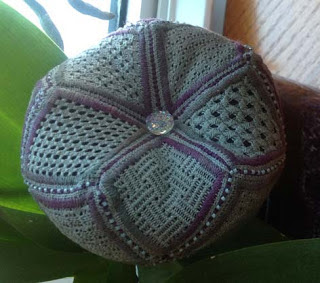 This SAL began with my January 8th 2011 post and ended with the finishing instructions on my March 18th, 2011 post. 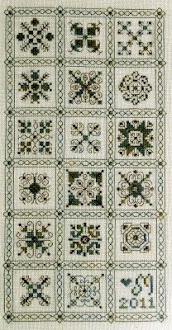 All of the April 2011 posts then added 3 extra squares and instructions to turn this 15 Sided Biscornu into an 18 Square Sampler.

Where visitors are from